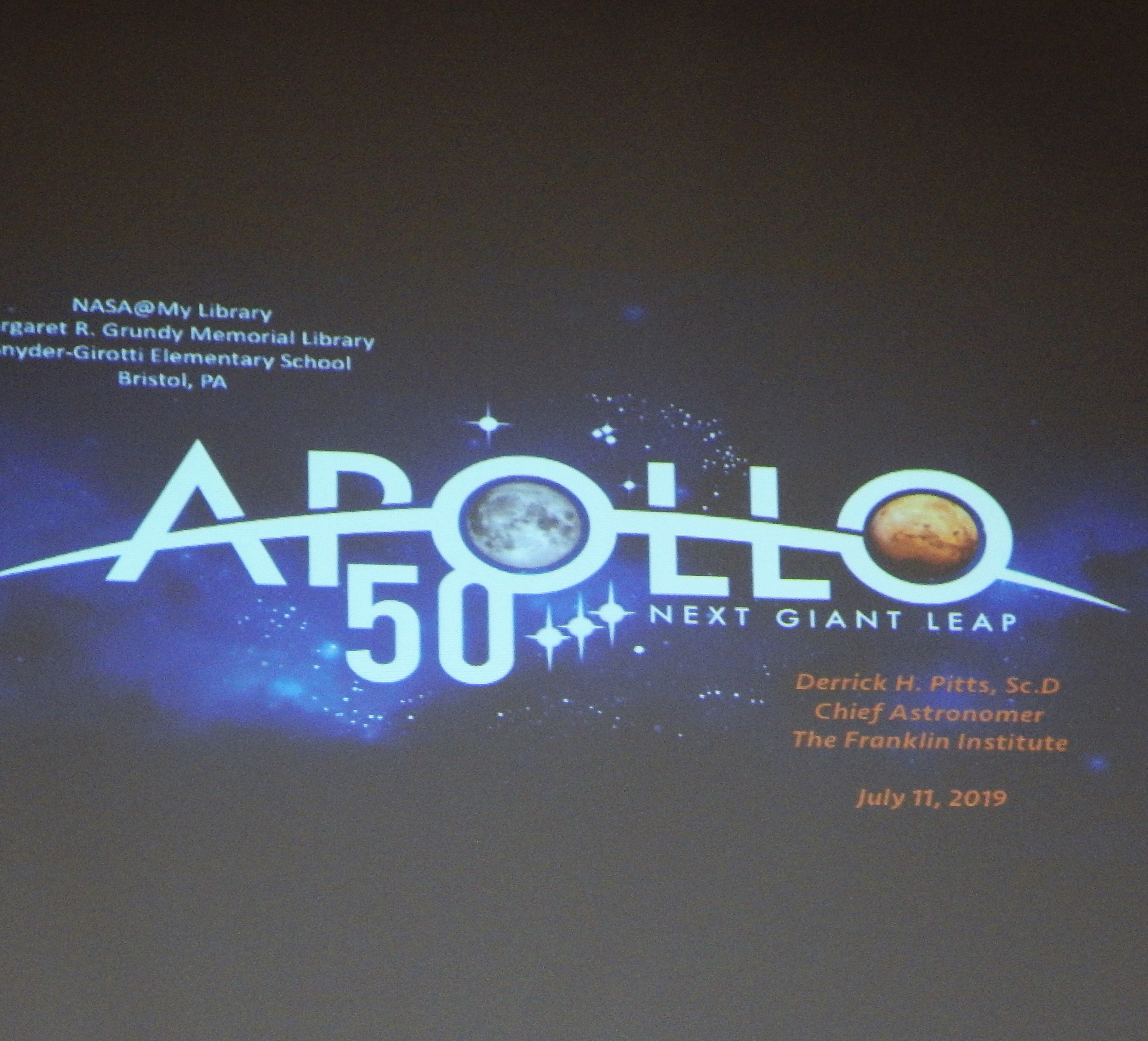 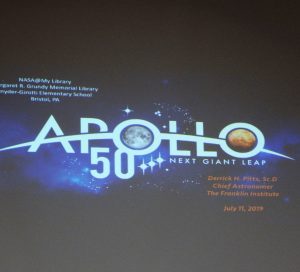 NASA: On to Mars!
A Modern Space Race to Fire Imaginations

Bristol, PA – Derrick Pitts, Chief Astronomer of the Fels Planetarium at the Franklin Institute, and a crowd of over 200 were on hand Thursday, July 11, 2019 at Bristol Borough’s Snyder-Girotti Elementary School discussing the 50th Anniversary of the Apollo 11 Moon landing. Pitts discussed the celebrated history of the NASA space program culminating with man’s steps on the moon and, more importantly, introduced the agency’s newest endeavor, colonizing the Moon to reach Mars. Using detailed illustrations, Pitts shared the visionary work that lay ahead of NASA and its many private and international space exploration partners. NASA’s Moon to Mars goal is “to enable human expansion across the solar system and bring back to Earth new knowledge and opportunities.” His appearance was made possible by the 2017-2020 NASA @ My Library grant secured by the Margaret R. Grundy Memorial Library. 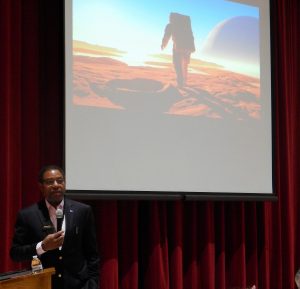 One of Philadelphia’s most passionate science educators and sought-after speakers, Derrick Pitts has been an integral part of the Franklin Institute since 1978, designing and presenting many of the Institute’s public programs and exhibits. Pitts serves as a scientific consultant to many organizations, and he has written numerous astronomy columns for newspapers and national magazines. He regularly appears on major international television networks, including the BBC, CBS Morning News, PBS, and the various late night talk shows, as a science content expert. For more than two decades, Pitts has hosted award-winning astronomy radio programs on Philadelphia’s NPR-affiliate station WHYY 91FM and he’s been the resident ‘Astro Guy’ for 88.5 WXPN’s award-winning radio program ‘Kids’ Corner’ for 25 years. Since 2010, Pitts has served as a NASA Solar System Ambassador as well. He is also an Education/Public Outreach advisor for National Radio Astronomy Observatories and Thirty Meter International Observatory at Mauna Kea, Hawaii. 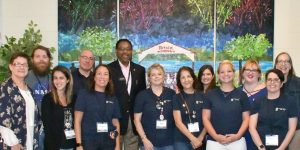 Through his associations with NASA and the astronaut community, Pitts was invited twice to fly items aboard Space Shuttle missions. He currently serves as a member of the Board of Trustees for Associated Universities, Inc., the agency responsible for management of the world’s largest radio telescopes, and for his alma mater, St. Lawrence University.  As a way to satisfy his itch for history and aviation and to honor the giants upon whose shoulders he stands, Pitts is a member of the Greater Philadelphia Chapter of Tuskegee Airmen, Inc., where he served two terms as chapter president.